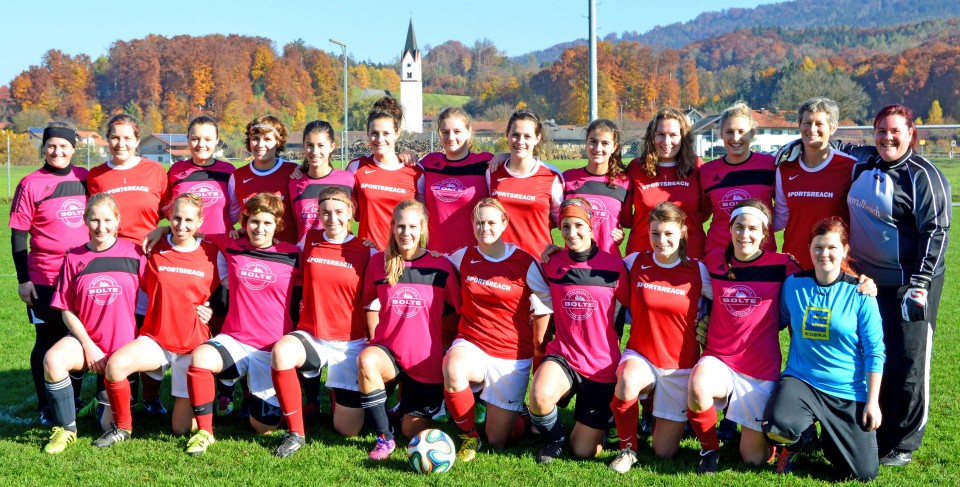 Game seven v Neubeuern
This really was an away game for us! We travelled over the border into Germany to the hometown of Lara and Luca who had returned home on the Friday morning. We were due to play their girls team at 1pm that afternoon. The facilities were great and the scenery around the pitch was outstanding as the trees were adorned with golden leaves bathed in glorious sunshine. Praise God for the amazingly great weather we have enjoyed in our time in Austria and now Germany. It was a real blessing to sit in the sunshine after the game with Lara and Luca’s teammates and for Sue to share her testimony in German again. We pray that her story of how God has proved Himself so real, through family tragedy and throughout more recent cancer will have been both a challenge and an encouragement to those who sat and listened. The girls gladly received her booklet and bibles afterwards as conversations flowed. Thank you so much to the coach for arranging the match and for the girls who came along and played us in a great game.

Match report:4-2 (1-2 HT Annie 2, Luca, Tanja (Lara scored for Nuebeuern)
You would have thought we would have learnt our lesson from the night before! Yet as the German coach’s discussed numbers per team, 10 a side was agreed upon and the game kicked off. Today it was only as we lined up to restart after half time that it was realised that we had had a player less for the whole of the first half!  ☺ 10 a side being 10 + goalie!!  ☺
The Nuebeuern team, resplendent in their hot pink shirts were a very good team and matched us early on and scored two very good goals. Lara was playing for them and as a scrambled clearance in our box hit one of our players it fell nicely to Lara who unleashed a thunderbolt of a shot past Zoe.
With the score at 2-0 we had to replace Lizzie who had played brilliantly, battling on through the pain barrier with a hamstring strain. The tide began to turn and with Zoe turning a shot onto the bar and then plucking more shots out of the air like a Gecko catching flies, we began to turn defence into attack. Annie chased a pass into the box and managed to turn it past the keeper to make it 1-2 at half time.
Caro replaced Zoe in goal and with renewed energy (amazing – game 7 in 8 days and today was 45 mins each way not the usual 30 mins they play in Austria!!) SportsReach continued the pattern of producing their best play in the second half. After good build-up play a shot from Luca fell back into the path of Anne and she scored her second of the game. With the defence of Sue, Ruth, Charlotte and Vicky now looking formidable we repelled every attack and took control of the game. Play broke down the right and again the tireless running of Jen combining with Luca saw her shoot and score to match her twin Lara in the goal stakes of this game.
A switch in formation saw Vicky pushing on into midfield in support of Sarah and Tanja dropping to centre half. As we attacked and forced another corner the ball was cleared and fell to Tanja just inside the oppositions half and she hit a shot rather like an Exocet missile which travelled at an enormous rate of knots rising no more than a foot above the ground and flew past the keeper to give us a 4-2 victory.
It was a fantastic team performance and they all played amazingly well digging deep to find the energy to keep running and encouraging each other.
Praise God again for a great day, a great game and for new friends being made. A return match is very much on the cards and we look forward to being back in Nuebeuern.