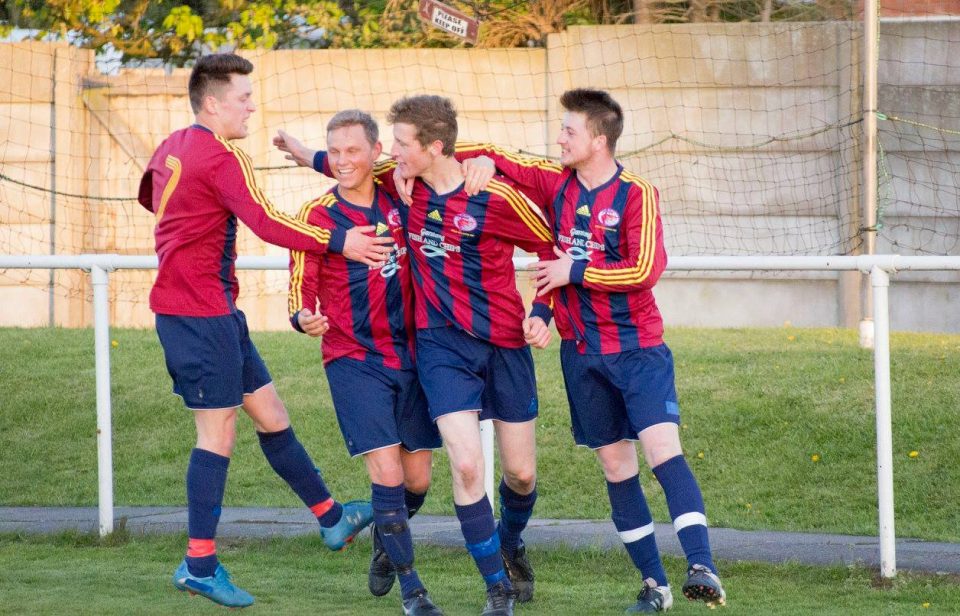 Over the last week, the remaining five games of the SportsReach Football League Season have been played. Firstly, Fulwood traveled to Loko, hoping to get the result that would help them in their quest for a third place finish this season. The following evening, Quernmore faced Moorlands, hoping to record their first league win against them. On Saturday, Moorlands and Loko were in action again, as they faced of against each other. Moorlands, having a busy week, finally completed their season by facing runners up Great Ecc. Finally, to round of the season, Quernmore faced Fulwood at home, both teams hoping to end the season on a high and finish with a win.

Loko finished of their season with victory against Fulwood. This game would go some way in helping decide who finished fourth and in Fulwood’s case, third. However, it was Loko who overcame Fulwood and place themselves in the driving seat for fourth spot, with a Graeme Beaumont goal enough to split the two sides.

On a lovely and warm Thursday evening, Quernmore faced Moorlands in their penultimate league game of the season. Before the game Moorlands shared about how they believe the Gospel is true, using the quote from Charles Colson to illustrate this – “I know the resurrection is a fact, and Watergate proved it to me. How? Because 12 men testified they had seen Jesus raised from the dead, then they proclaimed that truth for 40 years, never once denying it. Every one was beaten, tortured, stoned and put in prison. They would not have endured that if it weren’t true. Watergate embroiled 12 of the most powerful men in the world-and they couldn’t keep a lie for three weeks. You’re telling me 12 apostles could keep a lie for 40 years? Absolutely impossible.”

Moving into the game, Moorlands had by far the better start, scoring twice in the first 25 minutes, as Quernmore didn’t get going. In the 6th minute, Moorlands player Church rose highest to head home a corner, which was a bitterly disappointing start for Quernmore. Quernmore were trying to rush play too much and as a result were facing wave after wave of Moorlands attacks. In the 24th minute, striker Dent squeezed past one Quernmore defender before hitting a rasping drive that hit the post, then keeper Marsden before going in. Another disappointing goal for Quernmore conceded. The players were very disappointed at the start, especially as it was a game they believed they could win! As the first half wore on, Quernmore began to get a foothold in the game, starting to cause Moorlands problems. However, they stood firm, led from the back by defender Ohawke. Tom Kelsall went closest for Quernmore, narrowly missing. Ideally, Quernmore wanted a goal before half time to help them get back into the game, but was to no avail, as half time came with them still trailing 2-0!

After a half time team talk telling the players to up the intensity, to want it more, Quernmore came out a different side in the second half, from the word go attacking hard at Moorlands. There was also a tactical change, as Yates came on for Burrows and moved into centre midfield, in effect making an attacking five and a defensive five, with Rosendale sitting in, whilst both Yates attached to try and find the goal! Minutes into the second half, Quernmore were well on top, causing problems for Moorlands, who couldn’t cope with the sudden change in intensity. However, Quernmore couldn’t find their way through! They went close several times, hitting the post and caused some goal line scrambles as well! But in the 64th minute, Graham fired Home after a corner from Kelsall. Back in it, Quernmore were determined to go again and get a second. Moorlands did remind Quernmore that they were dangerous, a good shot brought a great save out of keeper Marsden. Quernmore kept going, throwing everything at Moorlands, Sutton going close but unfortunately couldn’t get it out of his feet! Rosendale went close, a curling shot from the edge of the box going inches wide of the post. Towards the end of the game, Quernmore sent tall centre half Burrow forward as an extra striker, trying to use the set piece ability of Kelsall to find the second goal. But it was to no avail, Moorlands held out and took the win. Comments from the sideline illustrated how good a game it was, commenting that it was a great game to watch, played at an incredibly fast pace.

Loko scored three goals in as many minutes on Saturday morning against Loko, to help give them a tighter grip on fourth spot. Firstly, Brad Rodwell netted in the 23rd minute, slotting away a penalty before centre half Beaumont netted in the 24th minute to double their advantage. And the crazy few minutes continued as Williams netted in the 26th minute to put Loko in firm control of the game. Moving into the second half, Loko scored again, Hanmer netting in the 47th minute to help further extent Loko’s lead. However, Moorlands weren’t just going to lie down and allow this to happen, Dent netting in the 53rd minute before Walker scored in the 56th. Was the comeback on? Unfortunately not, the score stayed as it was until full time as Loko ended their season with victory.

Great Ecc finished the season off in style with a hard working 3-0 win over new boys Moorlands. In a physical game, both teams fought to gain a foothold in the game. Great Ecc drew first blood when they were awarded an early penalty after a Moorlands Defender was adjudged to have pulled Dennis Pulford’s shirt in the box. Up stepped Jack Sharples to coolly slot the ball to the left of the keeper. 0-1. For the rest of the half both teams cancelled each other out, apart from when Jack Sharples shot straight at the keeper.

Great Ecc kept plugging away creating had chances, and the defence kept Moorlands at bay, Great Ecc’s keeper not needing to make a single save. Great Ecc doubled their lead after some good interplay down the right wing between Ollie Parkinson and Will Lavender, who crossed for Bill Gibbons to tap home at the far post. Great Ecc finally killed the game off when Jack Sharples scored his 2nd and the Team’s 3rd. Moorlands never stopped battling, but could never come up with anything to get past the organised Eccy defence led by captain Simon Greenhalgh.

On another beautiful evening, Quernmore faced of against Fulwood, hoping to put a better performance in than they did against Moorlands. Before the game, James Rosendale shared asking the question ‘What are you living your lives for?’. Was it for short term pleasures, such as Alcohol, money or cars etc? He then went on to say how Jesus will fill that gap that people are trying to fill with other things. He then moved onto saying how being a Christian isn’t rosy all the time and that there are hard times too, using the testimony of SportsReach director Sue Marsden to illustrate this. Finally, he posed two questions to close: Again, ‘What are you living your lives for?’ and then ‘Why are you saying no to Jesus?’ and question those listening as to whether they had a reason to be able to say no to Jesus and if they did have something better, he encouraged them to tell him because he wanted it too! Finally, at the end of the game, James gave out Sue’s booklet ‘Cancer, Christ and Me’ and another football related tract ‘Victory’ encouraging all there to read it.

The game started off at a quick pace, although both sides struggled to find much of a rytham in the opening stages and gave the ball away a lot. Quernmore’s aim was to get the ball down and play it about, something they didn’t do against Moorlands. They were beginning to find gaps in the Fulwood backline, trying to play balls over the top to Tom Keslall. Quernmore were finding joy with this, although they were still wasteful in possession. Fulwood very nearly scored the first goal of the game, a mistake from Quernmore allowed Atkinson in on goal, although he fired over the bar. Sutton came very close for Quernmore also, meeting a cross from Kelsall, but the keeper got down and made a great save. It was a back and forth game, one side attacking then the other, though neither made their short periods of possession count. However, in the 41st minute, Quenmore were to draw first blood. A clearance from Quernmore was met by Rosendale’s head, which was then headed on by Yates, missed by the Fulwood defender and came into the path of Kelsall, who calmly slotted the ball past the onrushing keeper. A well desereved goal for Quernmore, who in the final moments of the half had Fulwood on the ropes and looked to try and get a second. At half time, Quernmore were very pleased with their performance, although they knew they needed to carry it on into the second half to ensure victory. At half time, Lund and Sutton came of for Yates and Harwood.

Minutes into the second half, Quernmore extended their lead. A great ball into the feet of Harwood left him one on one with the Fulwood keeper again and he unleashed a sublime floated lob into the back of the net, a definite contender for goal of the season, it was a beautiful goal! Minutes later though, Fulwood were to be let back into the game. Fulwood were pushing more men forward and a couple of times Quernmore dallied with the ball, rather than clearing it, to their detriment as Fulwood were awarded a penalty in the 52nd minute after keeper Oldfield pushed Fulwood striker Garratt in an attempt to get the ball. Atkinson senior stepped up and coolly slotted the penalty away to halve the deficit. However, Quernmore were determined to get the win and continued to search for a third goal. They were having plenty of fortune with through balls and wasted numerous chances from the through balls. However, in the 57th minute, a ball played into Yates was fired home, after a fantastic turn left the defender no chance to block the shot. The game continued in a back and forth fashion, although Quernmore were controlling the game, Fulwood still looked dangerous on the attack, carving out some chances, including one that brought a great save out of keeper Oldfield. Quernmore also continued to carve out chances, but were very wasteful and did not score any more. A great result for Quernmore, who ended the season on a high with a well deserved win against a lackluster Fulwood side.