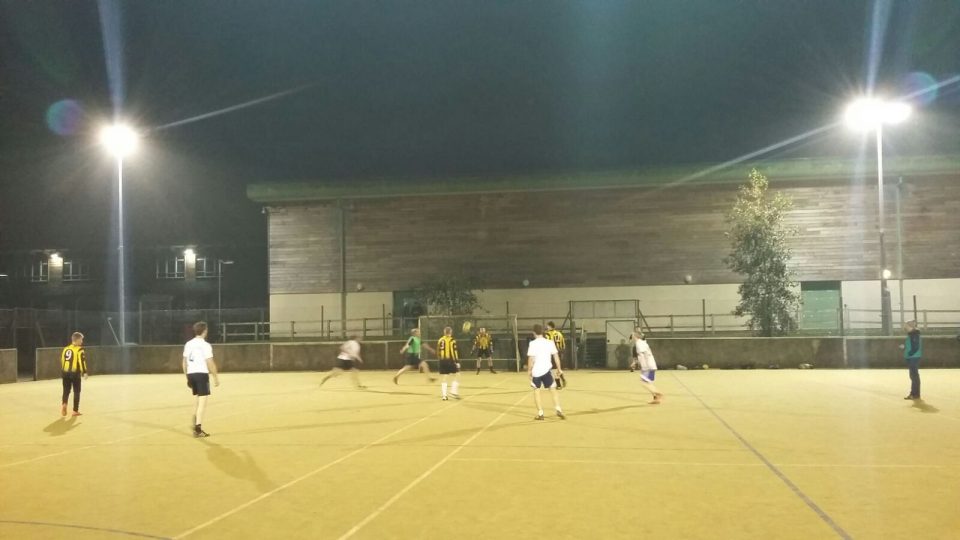 We are into the fourth week of the season and the games continue to get better and better! This week saw the final new team enter the league, with Capernwray Students now joining the league, completing our compliment of 13 teams. Last night, we had Roeburndale Rascals faced Garstang, Sam Dennis faced a tough game against Wray, whilst Capernwray faced a tough test against a good Newbeginners side and Crown Lane played Chipping.

One of tonight’s early game saw Roeburndale Rascals take on Garstang, and it was a game both sides were looking forward to on the fixture list. Both teams are young and full of youth and energy (other than Richard Preece, that is!) and looking to take 3 points and stay warm on a chilly night. Rascals came out looking fighting fit and soon got down to finding the net, with Will White opening up the scoring. With 3 Will’s playing on the same side it did cause much confusion as they soon scored again, with Will White finding the net first followed by Will Preece. Will White was absent from the Rascal side last week but has surely secured his name on the team sheet at their next fixture by scoring 5 goals during the game. Matt Sowerby was having a great first half running his socks off all over the pitch tonight, he wasn’t going to let Rascals run the show without fight! Early into the first half Ben Taylor popped up to score for Garstang to make it 3-1 but Rascals had no plans on leaving the score line close at half time and bombarded the goal time and time again finishing the the first half 7-1 up.

Into the second half, Matt Dawson continued to score for the Rascals, adding five goals to his tally tonight as well. With Will White and Matt able to score 10 between them it was goals galore with Will Huddleston bagging 1 and will Preece a brace that left Rascals well on top and winning the game 13-3. The two late goals for Garstang were scored by a determined Matt Sowerby. Garstang played well tonight but were outplayed by a strong Rascals side.

In the other early game, Sam Dennis’ side, looking for their first win of the season, faced a tough Wray side. The first half was very cagey, with only one goal being scored all half! That was to come midway through the half as Harry Gorst fired home to give Wray a first half advantage, the goal coming through some good link up play. The half had been littered with a number of good saves from both keepers, keeping the scores right down! Coming into half time, the game was very tight and both teams would take confidence that they could win the game. Moving into the second half, the game opened up, both sides attacking well, looking for the next goal, which would be crucial if they wanted to win the game. Sam Dennis’ side had a great opportunity to draw themselves back into the game, after having a penalty awarded 4 minutes into the second half. However, a great save from keeper Hugh Lunt meant the scores stayed level. To add insult to injury, soon after that penalty save, Wray went down the other end and scored, through Harry Gorst again. 2-0. In this short spell, Wray went from 1-0 up to 5-0 as following Gorst’s goal, James Burr fired home himself, playing the ball between himself and man of the moment Harry Gorst. 3-0. Soon after, there was the goal of the game scored, as James ‘Lionel Messi’ Burr had the ball on the right wing, with a man tight to him. He cut inside, past his ailing marker, into the middle of the pitch, with his silky skills mesmerising two Sam Dennis defenders as he dribbled past them like a knife through butter before poking it past the keeper. Who needs Messi when you’ve got Burr?!? 12 minutes into the second half, the final goal of the game was scored as Harry Gorst finished off a great performance by nabbing his hattrick. 3 to him, 5 to Wray and all 3 points!

At 9pm, we had Matt Dawson come and share with us. He shared how, when he was younger, the words ‘My God, my God, why have you forsaken me?’ have always confused him. He went onto say how it is not God who forsakes us or abandons us, but it is we, who do it to God. He encouraged all there to consider where we are with God – whether we know him or not. He shared about the curtain in the temple, how it separated man from God, but when Jesus died on the cross, it was torn in two, therefore allowing man to come before God. Matt shared how that is the same for us – we can come before God and become a follower of Jesus.

Tonight’s highlight game wasn’t Liverpool and Salzburg but the Caperwray international team and Newbeginners and what a game it was! Matthew Wraight’s newly formed side came out of the blocks all guns blazing tonight. Goodness knows with they feed the students on at Capernwray this year but it seems to be working! But first to score was well traveled Newbeginners. DJ, who could nearly be mistaken as Paul Capstick’s brother scored in the first few seconds with his first touch to give the Capernwray side something to chew on. But they didn’t chew for long as they repied with a goal from Ludwig seconds later. A good start for both teams but it didn’t take long for the students to get used to the Carnforth pitch and start to set the pace higher. They were full of beans and gravy aka energy and did not let Ryan Capstick’s side have any time to think, let alone play the football they are so used to playing. Capernwray’s start was like no other from previous years, this could prove to be the team to beat in the coming weeks. Col Sowerby took the gloves on for Ryan’s side tonight with Sam Gorst having the night of to go to His YFC. But he wasn’t missed as Col took on the duty well and saved some belting shots for the international side from Capernwray.
The students played some well organised football and even the highly experienced Dan Hallam was left head scratching trying to think of a formation and different tactic to settled the game down. The first half finished 5-2.

The second half started out the same as the first with Capernwray pressing hard. One player that stood out from the rest of the field was Christian from Spain. His footballing ability has certainly traveled with him from Spain to Carnforth High. He scored 4 cracking goals and ran past player after player with his fast feet and skill and gave Col more shots than he cared to wish for tonight. Newbeginners had only one trick up their sleeve to settle the students down and this was to bring on veteran, well schooled and capped Paul Capstick. Having played more games over the years than the youthful Capernwray side put together, maybe this would help. With his strength, power and ability to hold the ball up, Newbeginners were hoping for him to bag a couple! The game finished 8-3 to the students with DJ getting a second goal in the second half. Capernwray went away with a strong win tonight, whilst Ryan’s team will be pleased to have done the best the could against a difficult student side. Coll with be keen to get the glove off tonight and back to dolling his tups up from Kirby in a couple of weeks!

In the other late game, Crown Lane had to face a difficult Chipping side. However, Crown Lane had all the big guns out and soon raced into a two goal lead, thanks to Sam Hogarth and Luke Parkinson. Chipping didn’t know what had hit them! As the half wore on, Crown Lane worked hard, looking for more opportunities to add to their lead. Hogarth managed to net a couple more before half time to put them into a strong position. However, Chipping weren’t going to let Crown Lane have it all their own way and Chipping’s answer to Nemanja Vidic, Ste Cornall fired home from a couple of yards outside the box, to bring his side back into it. Moving into the second half, Crown Lane continued to play the ball about nicely, getting opportunities to add to their lead. They continued to do so as Hogarth and Dan Parkinson netted a couple more times for Crown Lane. Much like the Rooney – Ronaldo partnership of old, the two combined effortlessly well to see Crown Lane into a strong position to see out the game. Chipping still caused Crown Lane some problems as Matt Slinger and James Smith netted for them, but it was too little, too late as Crown Lane were cruising to a comfortable victory.

Next week, there are a number of exciting games, as Light Church face Halton Rangers and Crown Lane face Sam Dennis’ side in the early games, whilst Capernwray face Carnforth and Chipping face Newbeginners.