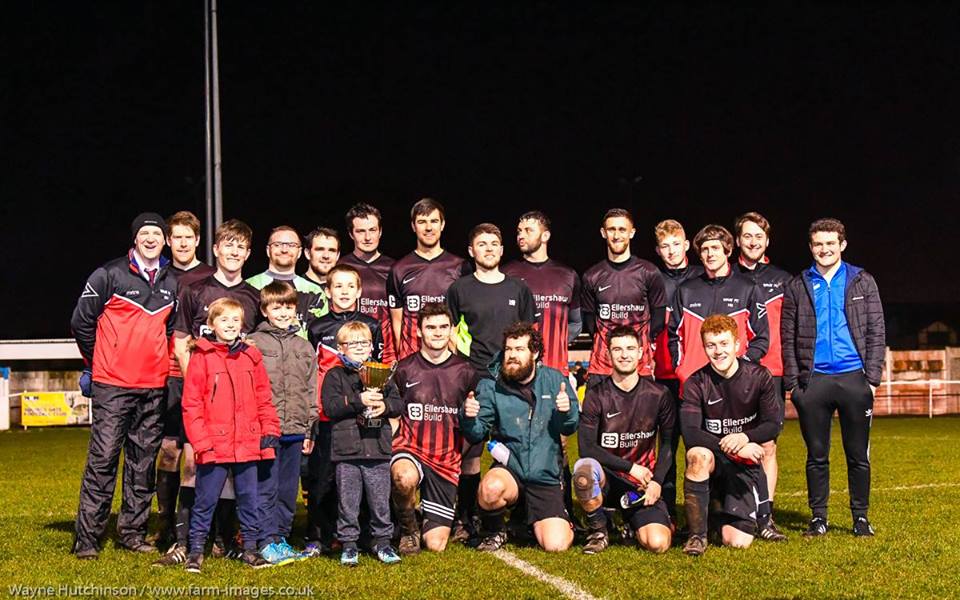 This weekend, there were two games taking place in the SportsReach Football League, with the second Farmers Derby of the season taking place between Wray and Quernmore, followed by a good game between Loko and Fulwood. Unfortunately Great Ecc vs. Moorlands had to be called off.

Before the game, Will Preece shared with us, before he leaves to go to Bible School next weekend. He shared about fear and how we all face fears of some sort. He spoke about how he had a fear about his flight to Canada next weekend but knew that God helps us with our fears and shared the Bible verse – ‘Do not be anxious about anything, but in every situation, by prayer and petition, with thanksgiving, present your requests to God.’ (Philippians 4:6). Going into the game, Wray started off the better side, with attack after attack in the opening minutes of the game. Quernmore were struggling to contain Wray or get any control of the game, thanks in part to Wray’s new winger, Tom Watson causing mayhem on the left wing. He was turning the defence inside and out and soon Wray got their reward 12 minutes into the game, as a driving run by Watson allowed him to play a ball into the box for Warren Goodley to fire home past the ailing Quernmore keeper. Minutes later, Watson doubled the Wray lead after another jinking run down the left flank led him to the edge of the box and he unleashed a lovely strike that flew into the net. 2-0 after 18 minutes. Both sides continued to battle and Quernmore grew into the game, getting some chances before half time but were unable to convert anything to halve the scoreline. Towards the end of the second half, Quernmore made a change, with Kaine Winder coming on for them into the heart of midfield, and made a massive difference, especially after Quernmore changed to a 4-1-4-1 formation. At half time, the teams went in with Wray still 2-0 up.

The first 10 to 15 minutes of the second half would be vitally important in deciding the direction of the game, and Quernmore made the perfect start to the half, Tom Luxton played in behind via Tobi Mustapha’s flick on, who then slotted the ball home with a lovey finish from a tight angle. It was all Quernmore at the start of this half, with attack after attack, the strength and power of Tobi Mustapha causing great problems for the Wray defence and soon after Quernmore netted again in the 59th minute, after a lovely, floated corner from Tom Luxton was headed home at the back post by Dave Moffat, to the delight of the Quernmore team, who had brought the game back to 2-2. Both sides kept battling hard and the next goal in the game was going to be crucial to the result. It was Wray who scored the next goal, 6 minutes later, after a ball was floated into the box, was palmed away by keeper Alexander into the path of the onrushing Goodley, who fired home – the quickest he’d moved all game! It also made up for his earlier miss, after firing wide with an open goal at his mercy! Minutes later Quernmore were level, this time James Smith got in on the action, latching onto a headed through ball from Jonny Sudell, taking it round Wray keeper Gorst and then firing home to make it 3-3 in the 74th minute. The game was suddenly raining goals! Quernmore goals were to be broken again however, after a ball from Oscar Foot was taken down by Tom Watson, who turned and fired home from the edge of the box, making it 4-3 with 12 minutes to go. The way Quernmore had been playing in this second half, an equalizer wasn’t beyond the realms of possibility, however, the fifth goal in this game came from Wray. Quernmore had switched to a 3-4-3 in the hope of finding the equalising goal, but it was Wray who caught Quernmore out to get the winner, after a ball was crossed into the box, a shot from Will Preece was straight at keeper Alexander but it somehow found it’s way into the net to make it 5-3. Wray take the spoils again in this Farmers derby.

This weekend, we see the SportsReach Cup return! We have Accrington and Longton joining us, as we split into two groups of four. Can’t wait!