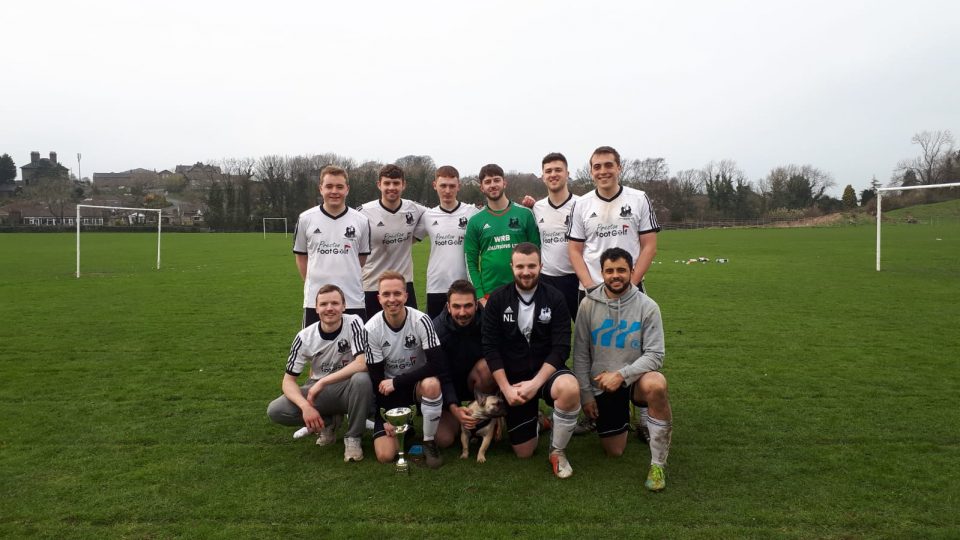 In this late report, two games took place last weekend. Firstly, a repeat of the cup fixture from the week before as Quernmore faced Moorlands again whilst Fulwood made the trip to face Great Ecc, hoping victory would aid them in their chase of the league title.

Coming into this game, Great Ecc had been on a run of really good form, winning all their games this season, sweeping all teams aside that came before them. Fulwood meanwhile, have got on with their season, chalking up victories home and away, which made this game a highly enticing prospect. Both teams came into the game with a bare 11 and both sides changed their shape, moving to a 3-5-2. Fulwood started the better of the two teams, scoring minutes into the game. A mistake from the Great Ecc midfield played the ball into the feet of Fulwood attacker Conor Mason, who subsequently slotted the ball home after a one on one against the Great Ecc keeper. Dreamland for Fulwood, the perfect start. Both sides continued to battle throughout the game, looking to get and take the chances that came their way. Fulwood striker Alexander was causing problems for the Great Ecc back line and had a number of good chances but none found their way into the back of the Great Ecc net. Great Ecc too had a number of good chances but were wasteful in front of goal, with none of the shots they had particularly making the goalkeeper work that hard. Coming into half time, Fulwood were happy with their performance but were looking for more goals in the second half to ensure the win. Fulwood, much like the first half, flew out of the blocks and moments into the second half doubled their lead, Calum Alexander dribbling past three or four players before slotting the ball past keeper to score a wonderful solo goal. Definitely a contender for goal of the season! The second half was all Fulwood so far, continuing to attack a Great Ecc side that weren’t having their greatest afternoon on the pitch! A really nice ball released Calum Alexander in behind once again and he was fouled just inside the Great Ecc box to earn a penalty for his team, which he calmly slotted away. 3-0 to Fulwood. They were in dreamland! Great Ecc continued to battle hard and tried to make something happen, but it was to no avail. They could find no way through the resolute Fulwood defence. Soon after Fulwood added to their lead again. Another good move resulted in a corner which was floated in nicely, onto the head of Calum Alexander, who headed home to complete his hattrick. A brilliant performance from him! Great Ecc continued to battle though and were trying to find a goal to try and spark some kind of revival, but it wasn’t forthcoming, until a fortuitous goal in the 86th minute finally got them the goal they were desperate for. Dan Parkinson played a floated in cross that evaded everyone and found its way into the back of the Fulwood net. It was nothing more than a consolation for Great Ecc though, having scored so late on and the game ended 4-1 to Fulwood, a well deserved victory.

Following Quernmore’s victory last week, they came into the game hoping they could get another win. However, Quernmore were missing a couple of players, whilst Moorlands brought out a strong squad. Moorlands started the brighter of the two sides, with Quernmore’s formation switch to a 4-4-2 not working for them. Moorlands were playing the ball about nicely and were getting some good chances, testing keeper Sutton in net for Quernmore. Moorlands were getting joy in behind and were getting some chances, drawing saves out of keeper Sutton. However, the deadlock was soon broken after a good finish from Regan-Stansfield, firing home into the bottom corner. Quernmore, despite the flat performance, were still in the game, but the ball wasn’t just falling right for them. However, shortly before half time, Moorlands got a crucial goal through Michael Orford, dribbling past a couple of Quernmore defenders before slotting home. 2-0 to Moorlands. Half time came and Quernmore changed their formation again, going to a 3-5-2 to try and shore up the midfield and give themselves more in attack. They started the second half much better than the first, getting a number of good chances but they couldn’t get the ball home. Quernmore were then awarded a penalty after a foul on Mustapha in the box, but it was not scored, which was a crucial moment in the game. Had Quernmore scored and halved Moorlands lead, it could have been a very different result, but alas, they didn’t and Moorlands soon scored again through a fantastic free kick from Michael Orford, firing the ball into the top corner. A fourth goal wasn’t far behind, Higgins beating the offside trap to score again for Moorlands. This was turning into a dream game for them! Quernmore added a goal of their own soon after though, Mustapha tapping home to get nothing more than a consolation for Quernmore. The result was sealed soon after when Alex Yare was played through again and slotted home to complete the victory and win 5-1.