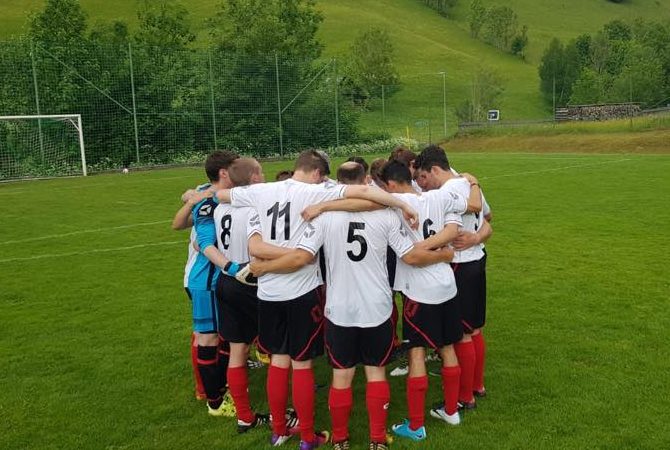 This weekend, all three scheduled league games took place – none succumbing to the weather this weekend! There were some exciting games taking place this weekend, with a mouthwatering clash on paper taking place between Great Ecc and Wray. Moorlands traveled down to face Fulwood and Quernmore made the trip up to Loko, hoping this weekend to get a win following their last minute defeats in the last two weeks.

This weekend, what looked to be a very exciting game on paper, didn’t quite live up to expectations, as a very good Great Ecc team overcame Wray with relative ease. Great Ecc started the stronger of the two teams as Great Ecc soon found themselves ahead after 13 minutes as Toby Parker fired home for Great Ecc. Both sides battled hard throughout the rest of the first hard, keeping things fairly even, keeping it to 1-0, nearly until half time. Had Wray taken it to 1-0 at half time, they’d have been the happier of the two sides, but Great Ecc are dangerous all over the pitch and captain Greenhalgh added a second minutes before half time in the 43rd minute. Half time came and Great Ecc were 2-0 up. Moving into the second half and similar to last week, Great Ecc started the second half like a deranged ferret and netter moments after the restart as Toby Parker scored again to make it 3-0. Certainly not the start Wray were wanting to the second half! Again, much like the first half, the second half didn’t have any goals for long periods, rather, the two sides battled, one to keep the score down and another to try and score a handful more! Wray kept Great Ecc out for a long period of the game, but once it hit the 80th minute, Great Ecc ran riot and scored 3 goals in the last 10 minutes. Booth scored the first in the 80th minute, whilst Sharples hit two, in the 84th and 89th minute to complete his hat tick and to complete the rout for Great Ecc. 7-0 and a long trip home for Wray!

Before the game, Loko Manager Jason shared with us using an illustration. He handed a bag of 100 coins to a volunteer, who subsequently was told to throw one of the pennies away. They were then given the option of either keeping the 99 coins or looking for the 1 coin that had been thrown away. Jason then shared about how God cares for us all and wants to know us all, how he will search for the 1 no matter what. Jason shared how the opportunity is there for everyone there to come to know Jesus, regardless of who they are or what they have done in their lives.

Moving into the game, Loko started the brighter of the two sides and were soon in front. They were playing the ball about nicely, whilst Quernmore had started slowly. Loko were having joy down the wings and had a number of good chances before they took the lead. Iddon was played in and shot back across the keeper into the opposite corner. It was a great finish and much deserved. This goal woke Quernmore up and they themselves began to have a number of chances. They soon came back into the game after a fantastic, towering header from midfield maestro Jonny Sudell. The ball was played into the box from a corner and in acres of space, Sudell leaped like a salmon and fired home. Soon after that, Quernmore found themselves in a undeserved lead, against the run of play. The ball was played into the box, coming to Luxton, who tried an acrobatic overhead kick, which found it’s way to Mello who stabbed home in the 27th minute. Both sides battled until half time, with neither side able to score again.

In the second half and unlike the first half, Quernmore flew out of the blocks and Luxton went from provider to scorer as a lovely ball was played to him, putting him one on one with the keeper, slotting the ball under the keeper and taking Quernmore 3-1 up. The next goal in this game was going to be crucial, as another goal for Quernmore would put the game out of reach for Loko, whilst another goal for Loko would bring them right back into the game. The answer game 10 minutes later, in the 56th minute, as Quernmore scored again to make it 4-1. Melody had roamed forward from right back, saw the ball sit up favorably and he hit an absolute pearler, a rocket into the top left corner. An absolutely beauty!! Quernmore were beginning to run riot, the front three of Sutton, Harwood and Luxton causing real problems for Loko. Quernmore got another in the 65th minute as Luxton got his second of the game, again, being played through one on one with the keeper, this time lobbing it over his head. Another great finish! Quernmore continued to attack but heroics from Loko keeper Ben Hodgson kept the score down. Luxton turned scorer to provider again as he played through Mustapha who netted his second goal for Quernmore in as many games. 6-1 and game over. It was a game played in great spirits and it happens all over again next weekend!

Both sides game into this game having not played a match since mid September, so both sides were very keen to get their season going again – and start it with a win! Moorlands had the better start as they scored not long into the first half, with Higgins, one of nine new signings, netting for them in the 18th minute. This goal spured Fulwood into action, and soon after, they scored as well, as Rick Atkinson scored for them in the 28th minute. The rest of the first half was an even affair as both sides battled to score again but neither side could find a way through. The breakthrough soon came for Fulwood as they scored twice in 12 minutes midway through the second half. Firstly, Danny Garratt capped off a man of the match performance with a lovely finish in the 58th minute, before Calum Alexander put the game beyond Moorlands reach as he fire home from the penalty spot in the 70th minute. The result moves Fulwood up to third in the table, behind Quernmore on by goals scored!

This weekend, the same fixtures are to take place as each side face each other again. Can Wray stop Great Ecc’s fantastic start to the season? Can Quernmore continue their good run of form and get another win, or can Loko find a way to get the win? Who will come out on top between Moorlands and Fulwood? All these questions will be answered this weekend….